Let's start with dresses I already own:

This is my very first item from Moi Meme Moitié, and I'm glad I had the chance to buy while it was still on the website ^_^ I was literally shocked, you know...generally MMM items go sold-out very quick >_< in fact I didn't have the money to buy it when it came out.
Fortunately it seems that the dress didn't have too much success and, at the moment when I bought it, there still were twelve (only for this type and colorway)...so, great happyness! ^0^

It has been A PAIN to obtain this dress O_O;;


I've lost in on auction some summers ago (like four years ago...I don't remember actually) and then I've NEVER saw it again for sale again since.
Two years ago I've found the other JSK on auction, I've won it...but unfortunately IT DIDN'T FIT ME T__T (damned my ribcage ><;)
I was very lucky because a girl from the italian community wanted to trade my JSK with hers, that I was sure it would have fit me...so we made the trade...when we met at Japan Expo in Paris :P
I won't lie, that had been one of my happiest days of my life! ^0^


I wanted this skirt since it came out, but obviously I didn't have the money to buy it during reservation period >_> so I had to stalk the auctions and I ended up buying it (FOR A F***IN' HIGH PRICE...darn) one year after, so yes, this is the first release UwU
I still love this collection, even if I don't wear this skirt so much....

My very first item by Juliette et Justine <3 I love how simple but elegant it is!!


I have this dress in beige, it's even my first piece in this color!
I have to buy everything to match this dress because I've never bought brown/beige/cream/ivory things before...so I'm still building some outfits around it ;)


It's still at my shopping service's...I hope to receive it soon >_< I would have loved to wear it for Christmas but let's face it, I don't think I'll be able to...=__= shipping to Italy are A PAIN...3 days to arrive at customs and then other five-seven (or even more <_<'') to reach my house. A PAIN.

It's so simple but lovely and cute *_*


This has his own story, too :P weeeeeell...the first time I saw this dress at a comic convention in Italy, it was for sale for 192 euros, too much for my financies ç_ç''' </3...so I let it go (and my heart bleed ç_ç), but I told myself that I would have bought it sooner or later...


Then I discovered the magical (and tough, sometimes) world of online auctions, and I've bidded it TWO FU**IN' TIMES before actually being able to obtain it...
The third time was the lucky one *_* I've never loved a Shopping Service like that moment before!! <3


I used this dress a lot, I won't ever, NEVER sell it. NEVER.
It's still one of my most worn dresses in my closet, with its simplicity it can be used for a bazillion of different outfits...it's also my casual dress! This summer I wore it with a jeans gilet, engineer boots and a  red cincher belt with a bow <3 so not rori but who cares :P
I can't describe how much I love it *_*

.....And now, let's talk about my favourite lolita dresses of all times ^_^

I consider this dress "My Chimera", because it's so rare and sought after that I won't probably never be able to buy it...in fact, it's still my #1 wish item! <3 (And I know that it will FOREVER be ç_ç </3) 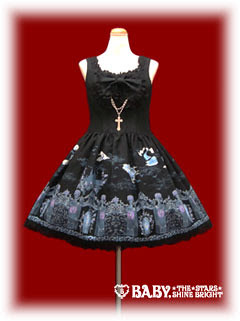 This dress <3 it would have been one of my favourite in my closet, because I already have the long version in black...but I don't like it as much as the short version T_T I will probably sell it when I'll be able to obtain the short JSK....there's nothing to do, long JSKs don't suit me, even if I'm 175 cm tall =_= I can't see myself in them.
Recently I started to like even the OP, but it's so damn expensive >_<''' so I think I'll stick with the short JSK when I'll have the opportunity ;D

(The short JSK, and I've explained above why).


What can I say? It's so elegant, beautiful, it has that fabulous cut in the bodice...it leaves me breathless <3 I was able to see it in real life thanks to a friend that has the huge luck to have it *_* (I would steal it muahuuhauahahuahuhuaahu :P)


Plus, I love teal <3 even  because it's not so frequently used in lolita!!

4) Alice And The Pirates Kuranosuke JSK

And this dress has caught my heart since it came out.
I'll be so happy one day if I'll be able to buy it <3 let's see if 2013 will be the lucky year ;P 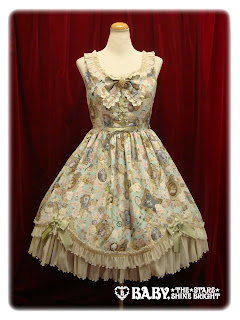 This is the reason why I started to love Baby, The Stars Shine Bright again since years, and it's actually the only dress I want in mint XD because I think it doesn't suit me too much...but let's say that this kind of green is so light and "dusty" that I would make an exception ;)
I love the print in every little detail, I love the cure Baby's designers put to create it, it's so detailed *_* the old pictures make me believe about great old times <3 it's so vintage, and I love vintage items *_* 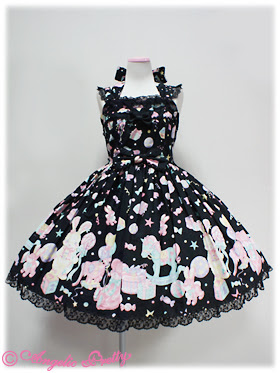 Five reason to love this dress:
-It has A LOT of shirring, unlike the old version;
-It's black with a super-uber-cute-pastel print (like Sugary Carnival, that I love so much);
-Its resale value isn't too bad *_* I always spot it on auctions for less than 30K...unlike the old version before the re-release;
-IT HAS STUPID TOYS IN THE PRINT. STUPID.TOYS.IN.THE.PRINT. *Heart-shaped eyes*;
-Halterneck <3 I'm in love with dresses with halterneck, I think this detail add a "50's" appeal to every dress ^-^

I hope you'll enjoy reading this post as much I've enjoyed writing it :)

Marta, aged between 18 and 100 (don't ask u_u!) I love alternative fashion, drawing, cooking (mostly treats)...and if you want to know more about me follow my blog!

How many passed by?